Let me take you through my story of hitchhiking in Scotland.

We needed to hitchhike from Edinburgh all the way to the Isle of Skye, which is basically crossing through the whole of Scotland. Quite a challenge, to be honest, but we were very positive about starting our adventure. 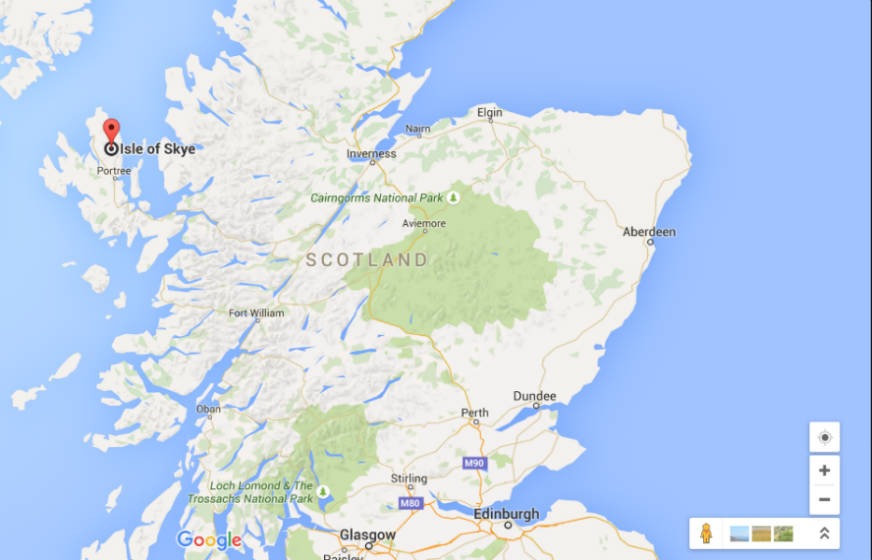 The important thing when hitchhiking is to know which route you want to take. We used Google maps and a local resident in a hostel as advisors on which route to take. Remember, it is unlikely that you will catch a car that goes directly to where you need to end up, therefore, we broke our route up into smaller destinations, hoping to catch cars between bigger cities on the way to Skye.

The first thing to do is to get to the highway outside the city, where all the cars go in direction to your next destination point. Therefore, we took a city bus to get as far out as possible. 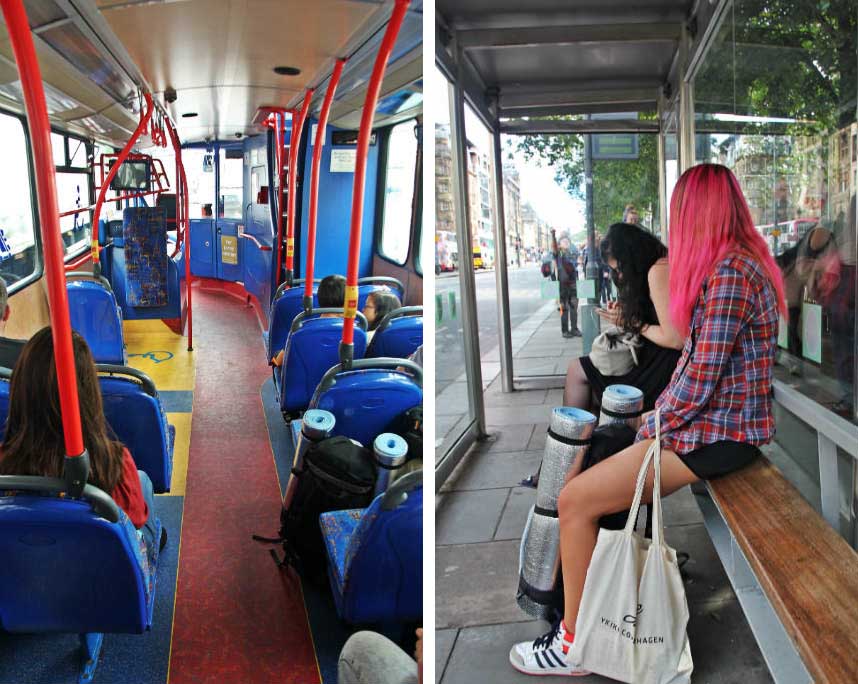 Once you get to the highway, be prepared to hold your hitchhiking thumb up for quite some time before you catch a car. For us, it took 30 minutes before we got someone to stop. Luckily, the first person could take us where we needed to go, so we got in. 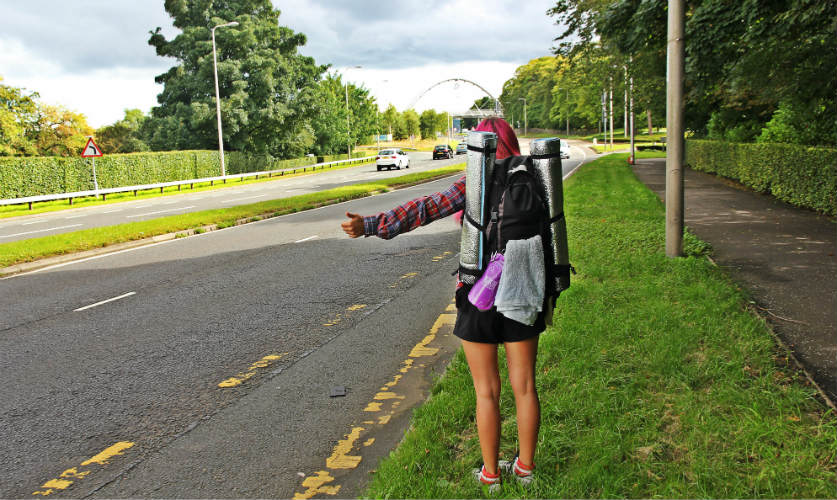 Ron, who gave us the first lift, turned out to be extremely friendly. According to him, there are not so many hitchhikers in Scotland anymore, but since he was hitchhiking Europe himself once and knew what it’s like, he always picked up the road travelers on his way. 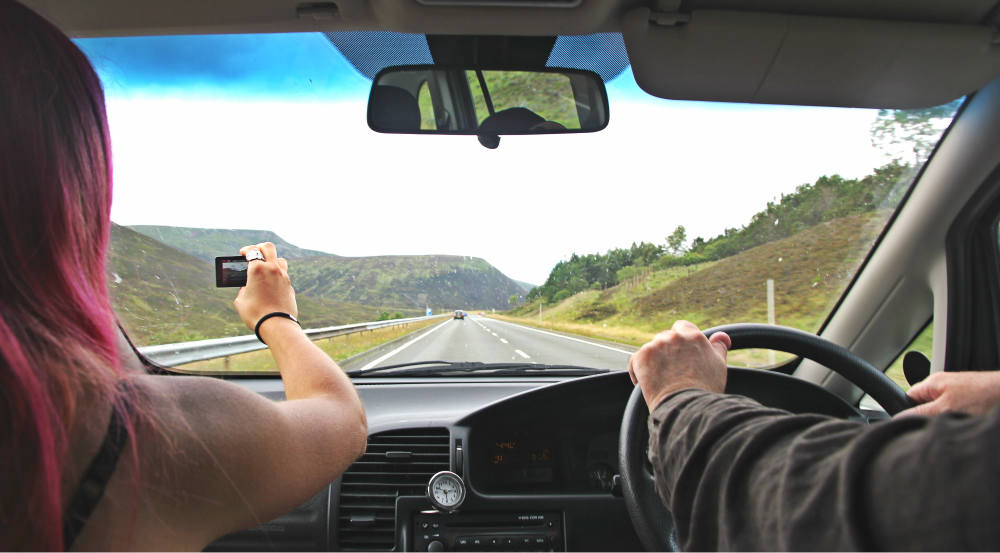 Ron was really excited to find out more about us and to share stories about Scottish history, which was very interesting to know. He even took the time to show us some historical sights that were on the way, which is not something you would expect when hitchhiking.

But thanks to Ron, we got to see the William Wallace monument in Stirling, which was quite fantastic. 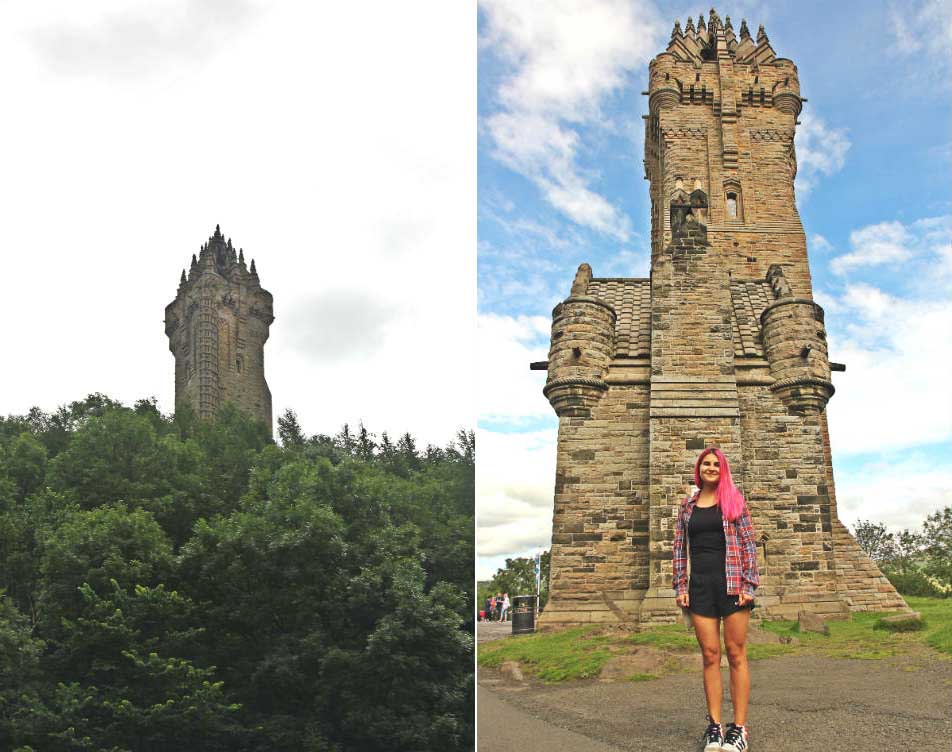 From the top, you can see the entire Stirling. 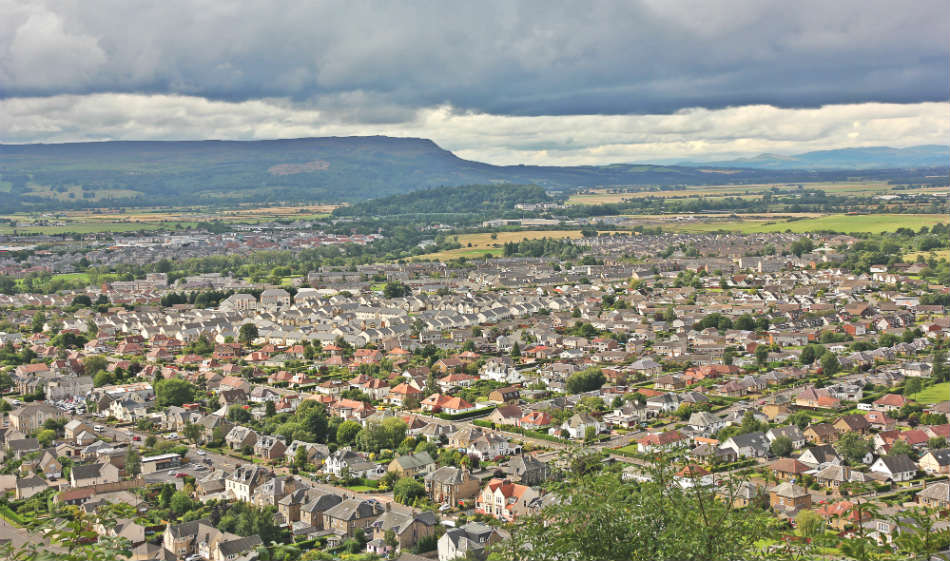 Our generous new friend took us much further than he needed to go himself, leaving us only half way to go.

Left half way to the Isle of Skye in the middle of Scotland we found ourselves facing a challenge. The west coast where we wanted to reach didn’t have any big cities, which means much less traffic. There was no need to hold the thumb up anymore as there were only a few cars passing through. We had some time to kill. 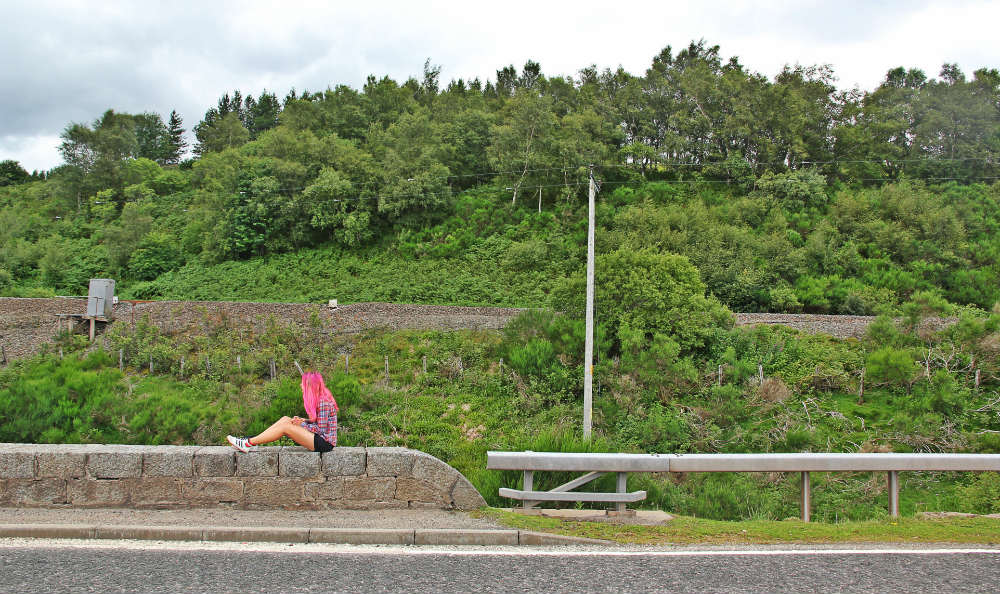 Couple more cars stopped on the way, but none of them was going in the direction we needed to get. That’s when we figured that our location was very unfavorable for catching a hitch, so we asked one of the guys to drop up literally couple miles further, where the highway went through. 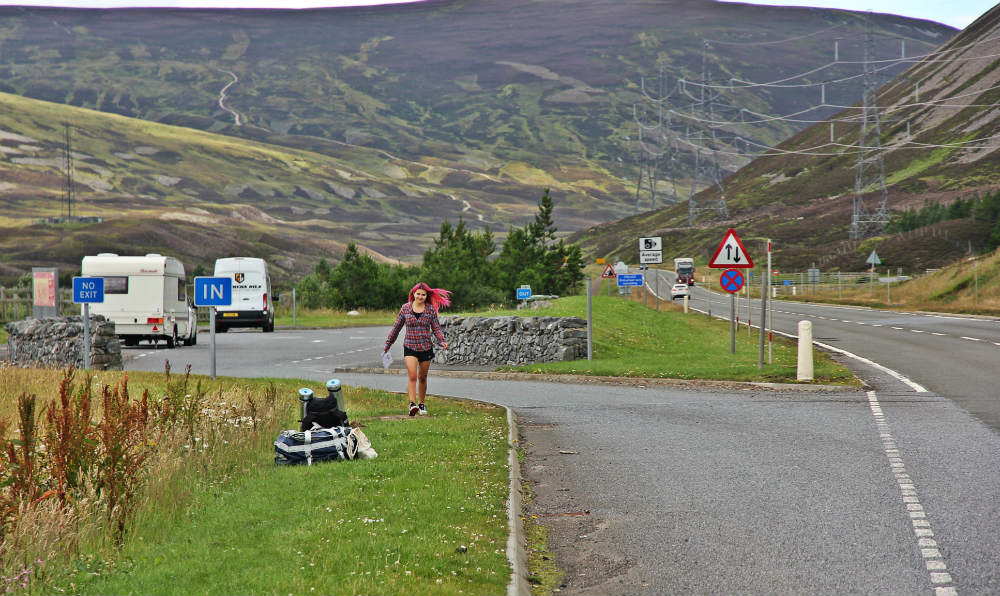 It took around 45 minutes of standing in the wind to get our miracle. We got a car to stop, which we hoped would get us at least to another city on the way. But since adventures are there to show us that miracles happen, it turned out that the driver was going straight home to Skye. We couldn’t believe our luck, it was so unlikely to get someone driving all the way to Skye, that we got to thinking whether we should start buying lottery tickets from now on. 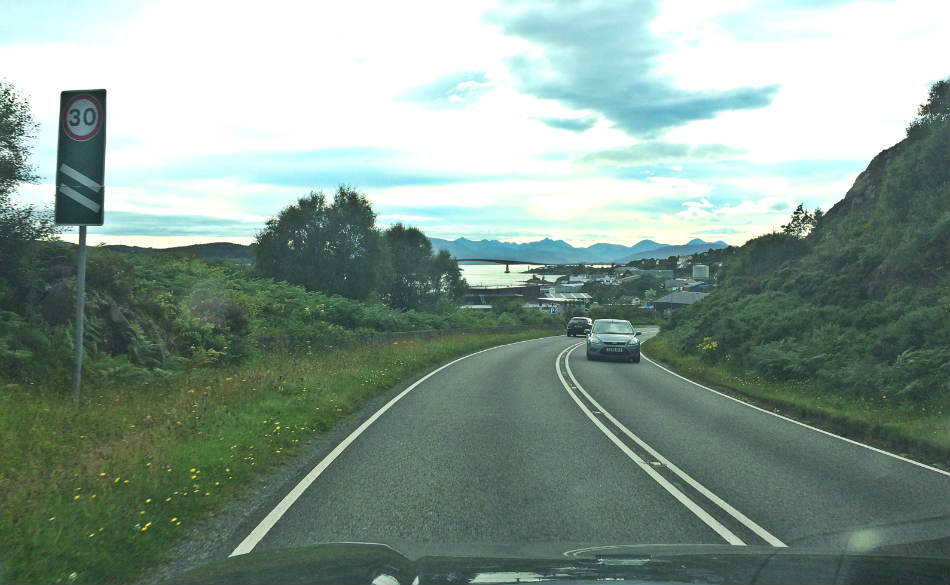 Our new friend named James was really into literature, especially Russian classics, such as Dostoevsky, Tolstoi, etc, so we had plenty to talk about. Since he was local, we got plenty of tips on where to eat and what to see. James took us all the way to the town of Portree in Skye.

Just to give you a sense of how much time we saved by getting there with one instead of several cars I will tell you that it took us 4 hours to get to Portree from where we were hitchhiking. Imagine a couple of stopovers in between! We would have never gotten to Skye in one day if James didn’t pick us up. Thanks to him, we got from Edinburgh to Portree in a total of 8 hours. 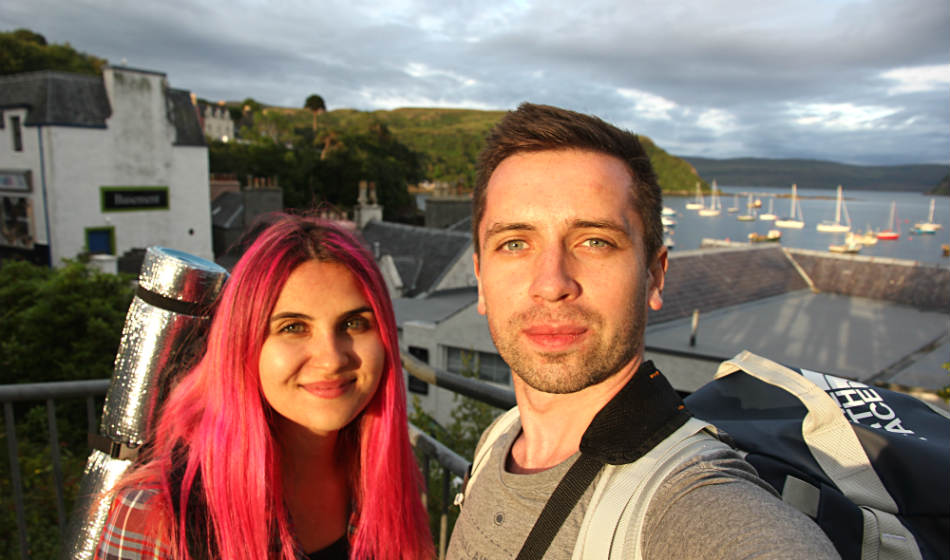 PROs AND CONs OF HITCHHIKING

Have you ever used hitchhiking as a mode of transportation? What are your experiences with hitchhiking? Share in comments below!

Pin4
Share
Tweet
4 Shares
Edinburgh isle of skye Scotland Stirling
by Lena
7 Comments
previous article: A DAY IN EDINBURGH: THINGS TO DO
next article: ULTIMATE GUIDE TO ISLE OF SKYE