The main reason why we went to Boquete in the first place is to hike the highest peak in the country – Volcano Baru which is 3.474 meters high above the sea level. Yeah!

The thing one should keep in mind is that weather in Boquete is changing very fast and it is almost impossible to predict what it will be like when you climb, it might be rainy, sunny or maybe even snowy. Even though we visited Panama in the beginning of the dry season  – December, we still had a risk of facing the rain. But we were determined to go either way.

So, how did it all start? We took the night tour, highly recommended by internet reviews, which dropped us off by the entrance to national park and foothills of volcano at midnight  – 12.00am. Deep darkness, wilderness and 14 km walking up to the top. No ways you could get there without a flashlight. And the only things you see on the way up there is your aching feet and a moon, if you are blessed with a cloudless sky. 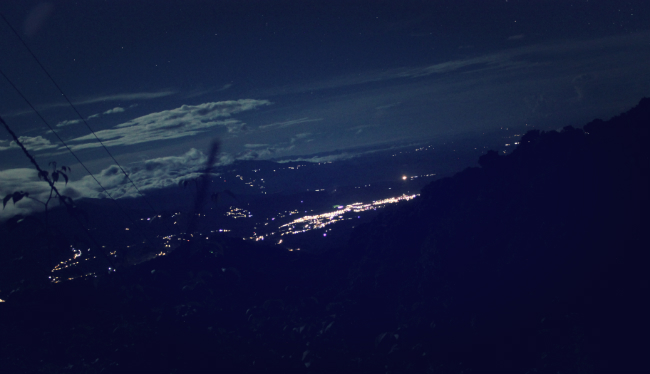 We were only three couples doing the hike at night, so it helped to know there was still someone in front or behind you, otherwise, it was spooky. At some point an animal ran right next to us and we were lucky it was a rabbit, or at least looked like one in the dark.

Even though the night was gorgeous, the hike was extremely tough, even for us who are not doing this for the first time. It took us around 5 hours to get up there. 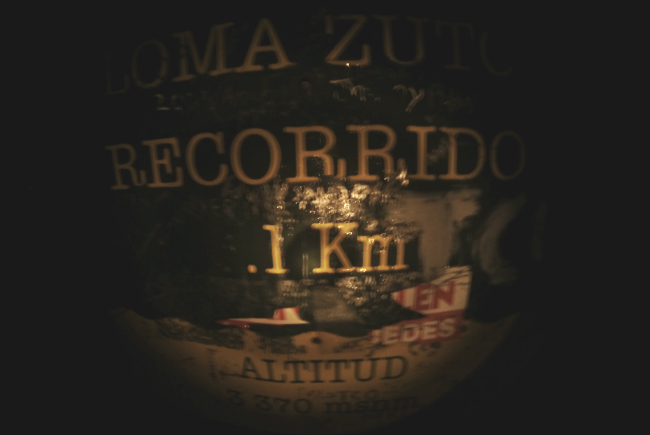 The idea behind hiking in the night is based on the assumption that when you get to the top you will have a heavenly view of the sunrise and if you are lucky – a one in the world opportunity to see both oceans from one spot which is only possible in the morning when clouds are still not covering the sky. If that is the case, well, then we weren’t lucky at all. First, it was difficult to figure out where the hell was the highest peak? There was some kind of metal stick on the rocks covered by graffiti attempts of previous visitors made with corrector pens, but no way to figure out if it is the top (which later turned out it was) or the crater of the volcano. It was freezing cold and we were waiting for around 1.5 hours to see the sunrise and maybe more if the sky gets clear. 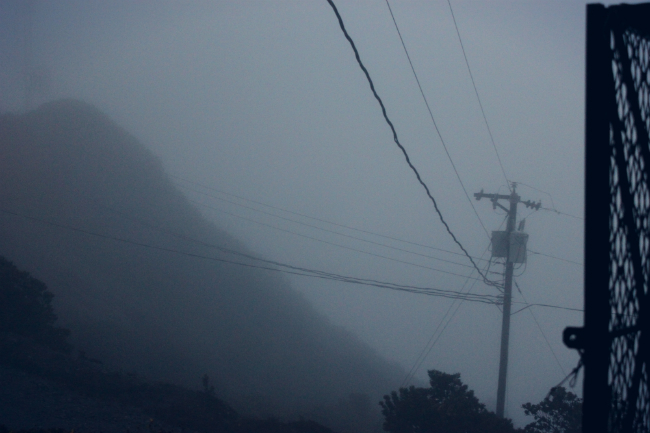 Below picture in short describes our struggle as it was. 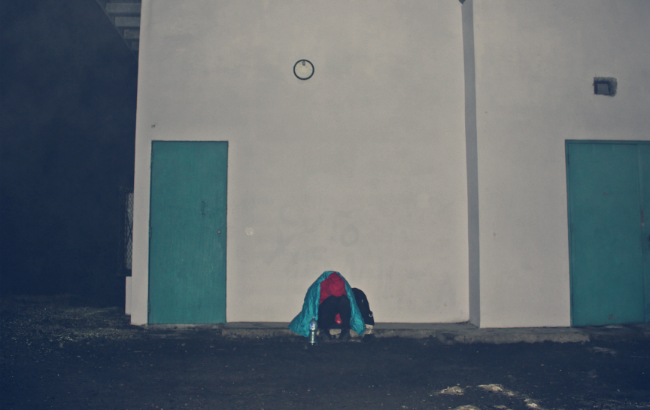 But no luck. Not only didn’t we get the view of the oceans, but it was also so misty and cloudy that we couldn’t even figure out when did the sunrise happen. 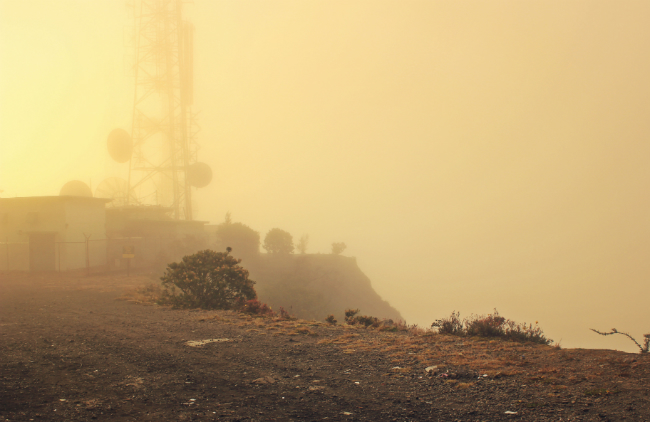 We still managed to get some interesting pictures of sunrise though. 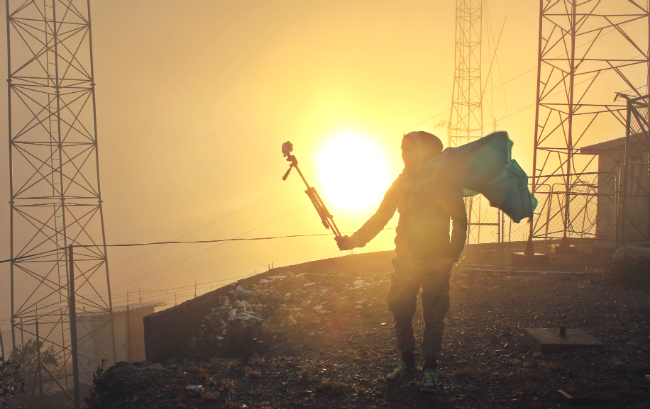 Since there was no view to see, we had no choice but to start our journey down. We were exhausted by the night of climbing and freezing but somehow with the rise of the sun we got our energy back. I do not know who came up with the idea to do hiking at night, I am sure that it was with best intentions and that several people really saw the nice sunrise, but for us it certainly was not the best experience. Only on the way back could we enjoy the hike, as the views of rainforest were great. 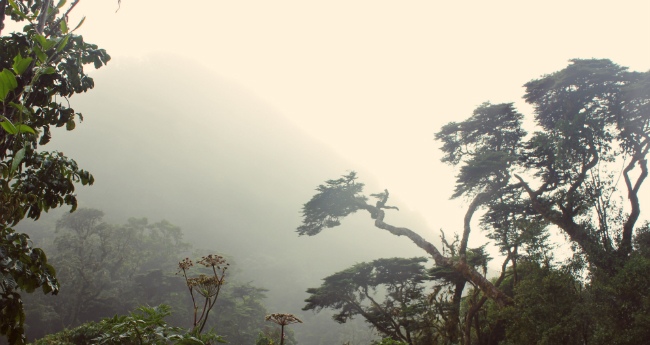 We saw many hummingbirds and some other birds – the forest was alive in the morning. 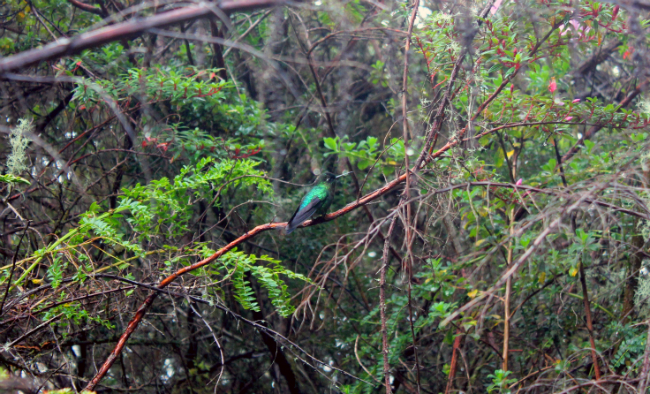 At the very foothills we met someone amazing yet again! 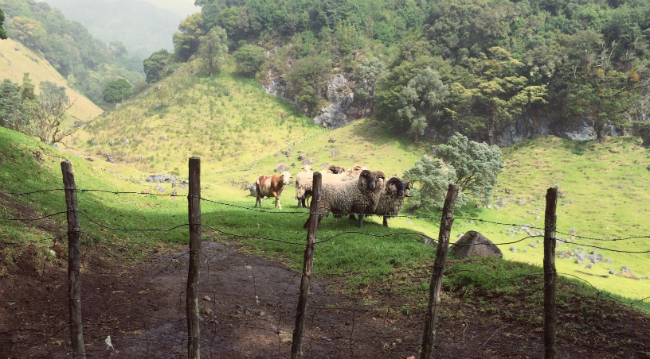 Even though we took much more time to take pictures on the way back, it took us only 3.5 hours to get down. Since we arrived at the destination at night we entered the national park for free. Usually there is an  entrance fee of 5$ which we planned to pay on our way back, but there was no one on the post to pay to, so we just gave our thanks the forest and kept walking. We didn’t walk much further until we realized we had another problem – no means to get back to Boquete. The buses were not running from volcano and the town was another 15 km down the road. After such an exhausting night it felt unbearable. And this is the point when we finally get lucky! One of the couples that was hiking with us got down just a bit sooner than we did, but knowing that we were behind they came back for us on the taxi they caught. Sweetness and saving in one package.

I could look at the hike to Baru volcano from two different sides. Obviously this was not the most charming peak view we were hoping to see and at some points during night-hiking or freezing at the top I was thinking all of it was a big mistake. But with the rise of the sun even the gloomiest thoughts go away. We saw the amazing Panamanian rainforest and needless to say had an amazing exercise all for free! With every adventure comes the learning and mine was: no matter how dark it get, there is always light at the end of the tunnel.