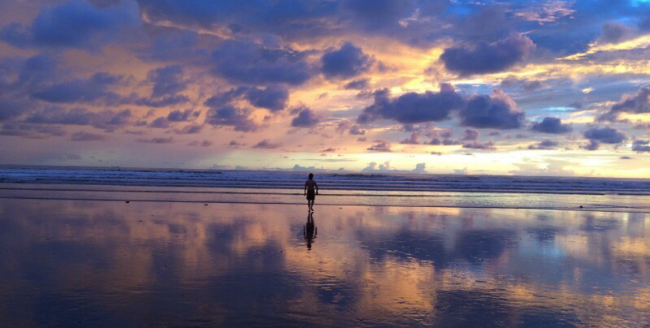 Since our traveling plans were destroyed by Costa Rica border control, we had only one night stay in Uvita, which turned out to be an exclusively beautiful place. It is one of the underrated places in Costa Rica, but which is building up quite fast due to a large number of internationals coming down and settling there in the last couple of years.

The Tracopa bus of the route David – San Jose dropped us off around 3 pm somewhere in the center of Uvita and it took us some time to walk to our hostel. It was situated a bit away from the town on a newly built street, which didn’t even have the name yet. We settled in around 4 pm and in order not to lose any time went straight to the beach.

The main attraction of Uvita is the Ballena Marine National Park, which is famous for being a place where Humpback Whales migrate each year to mate. Funny enough, if you look at the map of the Marine Park, it does look like a whale tale. Nature does have a sense of irony! 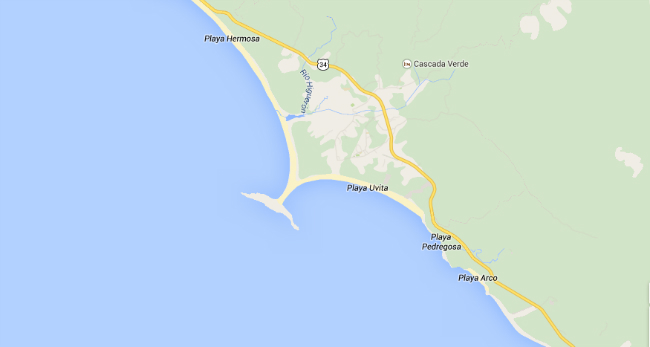 The entrance to Uvita beach is lying through the National Marine Park, which equals to 12$ of entrance fee for international visitors. But, luckily for us, so you could walk in for free after 4pm.

After the long and tiring day on the border and in the bus we ran into the water like crazy. Oh, how happy we were what we finally made it to Costa Rica! The water was very warm and the waves were soft. I am not a surfer but it looked like the waves are not big enough for it, maybe good for beginners, though. The beach was filled with crabs that were running away as soon as they hear someone coming. 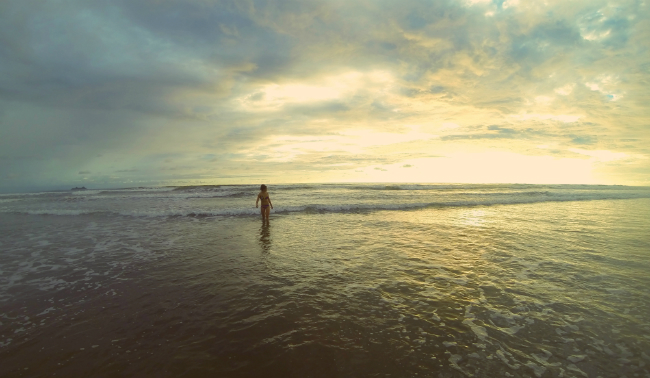 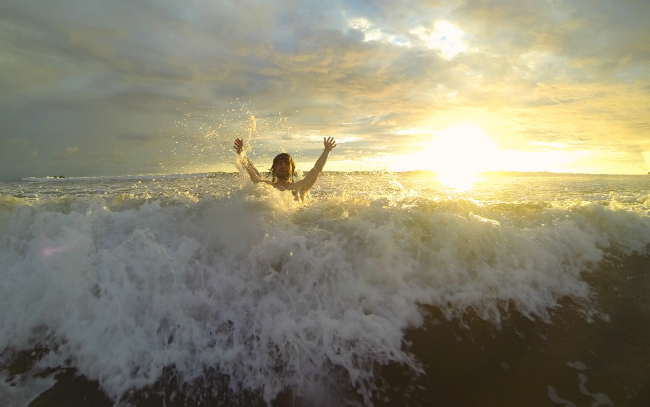 We made it right on time to splash in the warm waves and observe the gorgeous sunset over the Pacific Ocean. Sun is the best filter when it comes to photographs. 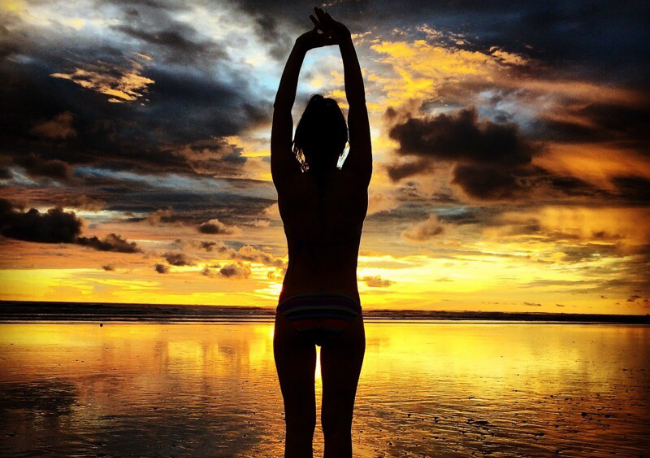 Where to stay in Uvita?

We were staying at La Ballena Roja Beach Bungalows, owned by very lovely couple from the USA – Scott and Kristie. They are extremely sweet and helpful. There is a possibility to rent out bicycles from them, which unfortunately we didn’t have time to do because of late arrival. Breakfast is not included, but it is possible to get a coffee in the morning for 1$.

The cabin itself is new and very clean. It is basically a wooden house with freshly painted walls. The owners also hold a bar and a pizza restaurant at their house. We found it a bit expensive – 14$ for a medium pizza, so we walked a bit further to the local bar for our dinner.

If you are looking to upgrade your stay and relax to the fullest, you might want to look through some high-end hotels in Uvita!

The next day, we had only until noon to enjoy Uvita before we had to leave. We decided to spend that time by the waterfall, which is just 1.5 km away from Uvita itself. It was totally possible to walk there, but since we were pressed for time we took a cab which cost us 4$.

The taxi dropped us off at the entrance, but if you chose to walk, you can easily find the way by following the signs that say “Cataratas” which means waterfalls. There is a small restaurant which gathers the fee of 2$ to see the waterfall at the back of their property. There were two young girls at the bar and they kindly allowed us to leave our bags behind the counter so that we could go and have a swim. 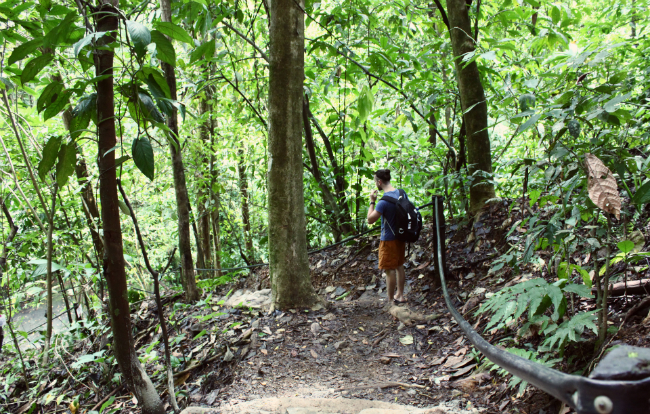 There is a steep path down to the canyon. The way Costa Rica stands out to me, is that all of the sudden you have all this vegetation around you just a step away from the streets. 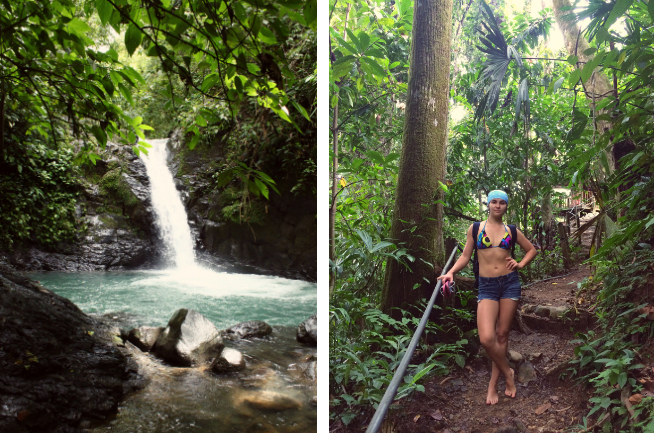 When we got down to the waterfall there were already people there. Apparently, it is a good spot for jumping into the water. Which I personally didn’t feel like doing, but there were some brave souls out there who did. 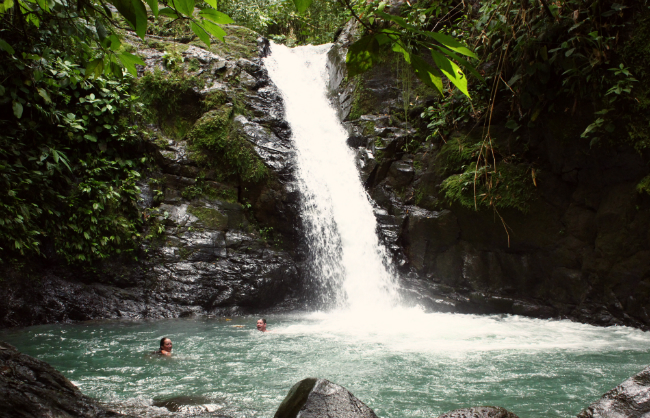 There are also a couple of swimming holes near the waterfall itself allowing you to cool the body off from constant heat of Costa Rica.

Our stay in Uvita was short, way too short. If we could cancel our further plans we would definitely choose to stay here longer and explore the Marine National Park and the little town, especially since it is all so new and not packed with tourists yet. All I can say is that Uvita is a truly an underrated escape of Costa Rica.